When global health physicians see inequities, we often want to get our patients in low-resource settings all of the advantages afforded to our patients in high-resource settings. Among our most common practices in high-resource care are disease screenings. Yet, our screening tests are not perfect and may at times be harmful. Ensuring that the best intentions don’t lead to a “diagnostic colonialism,” global health physicians may benefit from a rigorous evaluation of our practices prior to advocating for similar tests in all settings. This month Boston Global Health sat down with Dr. H. Gilbert Welch to discuss screening tests and their implications for patients.

Dr. Welch’s research examines the problems created by medicine’s efforts to detect disease early: physicians test too often, treat too aggressively, and tell too many people that they are sick. Most of his work has focused on overdiagnosis in cancer screening: in particular, screening for melanoma, thyroid, breast, and prostate cancer. He is the author of three books: Less Medicine, More Health: 7 Assumptions That Drive Too Much Health Care (2015), Overdiagnosed: Making People Sick in the Pursuit of Health (2012), and Should I Be Tested for Cancer? (2006). His op-eds on health care have appeared in numerous national media outlets, including the Los Angeles Times, The New York Times, the Washington Post, and the Wall Street Journal.

Boston Global Health: Disclosure is noted and appreciated. You’ve been quite an advocate for raising questions about if our medical interventions are really working…especially in regards to screening…How did you get to this point in your career? What made you start asking these questions?

Dr. Welch: There is no one event I can attribute it to…but I will say as a resident @ the Salt Lake VAMC I was impressed how much damage we could do evaluating pulmonary nodules. That started me wondering how hard we should be looking for things to be wrong in those who are well.

Boston Global Health: Most times we think screening can’t be bad…aside from cost to the healthcare system…what’s the worst that can happen?

Dr. Welch: The worst thing? Patients can die from complications of unneeded interventions (diagnostic procedures or therapy for a “disease” that was never going to bother them). Let’s be clear, this rarely happens. But just because it rarely happens, doesn’t mean it never happens.

Boston Global Health: Fair and many of us have seen that at least once…so what other things concern you beyond worst case scenario?

Dr. Welch: Overdiagnosis and overtreatment would be next on my list. These have real harms other than death – medication side-effects, surgical complications etc.

Then there is fear. Screening is often promoted with scary messages – that’s an odd way to promote health. False alarms are common. And some people get stuck somewhere between being told they are “normal” or the have “cancer” (dysplasia, etc.) and get caught in loops of repetitive testing.

Finally, there is money…money increasingly coming out of patients’ pockets. Medical care is a common cause of financial stress and personal bankruptcy…that can’t be good for our patients’ health.

Boston Global Health: Yeah “cancer” is a pretty scary word for patients…I’ve found that unlike other things (exp. Flu vaccine), mentioning the word cancer drives patients to screening and treatment, but we know not all cancer is created equal…or close to equal.

Dr. Welch: All cancers are not equal. And ironically we are learning that from our early detection efforts.  They’re trying to corral birds, rabbits and turtles. But the birds have already gone (they are the most aggressive cancers, those that have already spread by the time they are detectable). You can corral the rabbits, if you build enough fences (more slowly progressive cancers, where screening may help – if treatment following screen detection is reliably more effective than that following symptomatic detection). Then there are the turtles…no need for fences…cause they’re not going anywhere anyway.

Who would of thought that CT scanning in the general population would identify almost as much lung cancer in non-smokers as smokers? Must be because of turtles – as that flies in the face of what we’ve known for years: smokers are 10, 20, 30 times more likely to die from lung cancer.

Boston Global Health: In other words if we know smokers die from lung cancer at rates several times that of non-smokers, screening the general populations is picking up a lot of lung cancer that wouldn’t ever be fatal – the turtles. So then maybe we should step back…what makes a good screening test in the first place?

Dr. Welch: There are a number of ways to answer that. But in a nutshell a good screening test would lead to a substantial lowering of mortality (or major morbidity) without leading people to be treated needlessly and creating a lot of false alarms.

Boston Global Health: So let’s imagine Santa has decided this year to go with a healthcare system theme…young Dr. Gilbert bounds down the stairs to see which screening tests have arrived under the tree…which tests are you jumping up and down for…which ones bring you a pleasant but reserved smile…and for which ones are you looking frantically for the gift receipt? In other words: 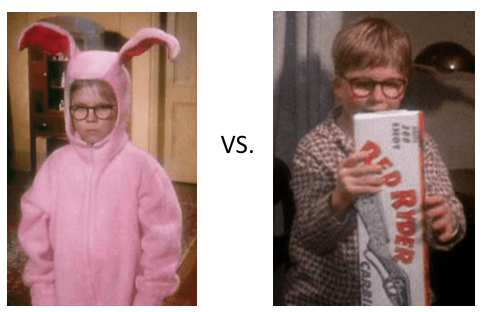 Dr. Welch: Jump up and down? That wouldn’t be a test…that would be something that helped everyone eat better, find meaning in life and move more (e.g. jump up and down).

Boston Global Health: I mean I’ve seen people jump around a lot at the idea of a colonoscopy…maybe I misinterpreted

Dr. Welch: As for pleasant, but reserved – that would be blood pressure screening. Lowering really high blood pressure is the most important preventive intervention we doctors do. Of course we can overdiagnose hypertension – that’s why we are being encouraged to measure blood pressure at home and we can overtreat it (as I fear the new guidelines encourage us to do).

Re: Colonoscopy (Disclosure: my father died of metastatic colon cancer @ age 60). First it is not that bad…particularly with Verced. I thoroughly enjoyed mine… it’s described in excruciating detail in Less Medicine, More health.

CRC screening does help lower CRC mortality (although the observed decline in CRC mortality can’t be all about screening) see enclosed Colorectal Cancer on the Decline — Why Screening Can’t Explain It All (link below).

And we screen for colon cancer by sending people to operating rooms (i.e. colonoscopy suites). Huge cost – and as you suggest some don’t like it. That’s why I’m so pleased that VA CSP (Veterans’ Affairs Cooperative Study Program) is in the midst of a trial of colo vs FIT (CONFIRM).

Boston Global Health: So treatment improves at the same time as screening studies are done – this complicates our studies no?

Dr. Welch: Ironically, the better we get at treating clinically evident disease, the less important it becomes to screen for it. That’s why we don’t screen for pneumonia.

Boston Global Health: So let’s go to the pink ribbon elephant in the room…I had one of my international colleagues (from a low-resource country) describing to me last night the need to get more women screening mammograms.

I wasn’t so sure this was a good idea and it had little to do with resource allocation or access to treatments (though also important)…it would seem even in high resource settings that the data isn’t as clear as we’d like it to be.

Dr. Welch: Again, the better we get at treating clinically evident disease, the less important it becomes to screen for it. That’s what is happening in breast cancer. But the biggest problem with breast cancer screening is there are a lot of abnormalities in the breast, particularly if you are looking for small abnormalities. Finding them starts a whole cascade of events that has very little, if any, effect on breast cancer mortality, but a very big effect on women’s lives.

….RE: Low-resource countries. I can’t imagine anything worse than population wide mammography with no plan for what to do with abnormal exams. Far better to educate women to come in when they notice a new breast lump – to have a diagnostic mammogram. That’s not screening, that’s diagnosis…that’s good medicine.

Boston Global Health: …But ACS (American Cancer Society) says every year at 45 (every other at 55), USPTF (United States Preventive Services Task Force) says every other year 50, ACOG (American Congress of Obstetricians and Gynecologists) every year starting at 40, so does American College of Radiology and on Sundays the NFL tells me it is a “crucial catch”…what is driving these recommendations? It can’t be the same data since they’re all different?

Dr. Welch: The NFL has bigger health issues they should be worried about (head injury? gun violence?), but to their credit this year they expanded to cancer in general. (Full Disclosure: I was pulling for the Pats over the Steelers this past weekend)

But you are right the recommendations are all over the map. Remember no matter how much data one has, one cannot avoid value judgements. Some seem to think that if anyone avoids a breast cancer death due to screening, we should screen no matter what the harms are that accrue to others. I strongly disagree. I’m worried about what happens to 999 others…

Clearly starting later, stopping earlier and screening less frequently has a more substantive effect on lowering the harms, than lowering the benefits.

One other thing to touch on: misleading feedback from screening. It’s really important for your global health colleagues to understand that screening programs will reliably lead to a more favorable stages distribution (e.g. smaller proportion of cases are late stage), longer survival times and more survivors. All that can occur when screening is, in fact, having no effect on mortality (or is even raising it).

Boston Global Health: For our Boston crowd I understand you will be in town soon? (Full disclosure: I live in Boston but own several varieties of Terrible Towels-I’m now also confused on the data surrounding a catch).

Dr. Welch: Yes I’m slated to be at Dana Farber on February 28th for the Breast Oncology Seminar series at 8 AM. (Read the rule book…)

Boston Global Health: Great, we’ll see you then! For those looking to hear more from Dr. Welch we’ve included an excerpt of his recent writings as well as a youtube link to one of his recent talks below.

One comment on “Is more screening a good thing? A Boston Global Health chat with researcher and author Dr. H. Gilbert Welch.”