I’ve been told India is a large country with a mix of innumerable customs, practices, beliefs, etc.  Accordingly, there are many ways to be a badass in India.  The following list is not meant to be all-inclusive but to give a sense of the variety mostly according to what was personally witnessed.  Just to be clear for anyone reading this blog who is not immersed in Western pop culture, I am not insulting anyone’s derriere, but referring to the colloquial definition for one who is exceptionally cool, usually with strong masculine connotations. 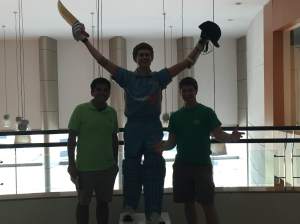 Be really good at cricket:

Cricket has been called not just a national sport but an “obsession.”  So, if you are a capable cricketer you are the man.  This is especially true of the “Little Master” Sachin Tendulkar (recently retired) who in 2012 became the only player to score 100 international centuries.  Jalpan and I were lucky enough to run into him in the mall.

Be really good at religion:

Revered by both Hindus and Muslims Sai Baba was a late 19th-early 20th century spiritual icon who “taught a moral code of love, forgiveness, helping others, charity, contentment, inner peace, and devotion to God and guru. He gave no distinction based on religion or caste.” (wikipedia.org).  Sai Baba has been an inspiration to millions of people over the course of generations.  Do religion right and your image will end up on the wall of innumerable households, shops, and sacred places.

Being a badass is arguably more about behavior than appearance, but the latter helps.  And getting ripped is now a required aspect of being a successful Bollywood actor.  Salman Khan, the “tiger of Bollywood” seems to be selling sportswear everywhere.  Moreover, there are almost as many small gyms as pharmacies advertized at the roadside.  Eager not to deflate during my time in India I myself decided to get in on the action. 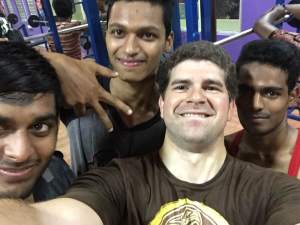 Making new friends at the gym

I need to give a shout out to our driver, Anil, who is definitely a badass for his ability to weave through the Hyderabad traffic without so much as breaking a sweat.  He can be a veritable artist with that horn.

Equivalent to the British “diamond geezer” or German “alter schwede” (“Old Swede”), I reserve this category for badasses who have made it into their golden years and still exude the charisma of earlier days. I’m not talking about that cheesy Marigold place for faded British actors but rather that Dos Equis guy.  While he is fictional, there are plenty of real legends, including a certain former civil engineer in Secunderabad who can tell you all you want to know about the best damns in the world.

Mother Teresa of Calcutta at the entryway to KIMS Hospital

Although benevolent and medical works are not traditionally on their own included within the designation of “badass,” the doctors and nurses who perform such tasks are clearly some of the coolest people we’ve met here.  There is a special brand of people who seek out and help those most in need, often at great personal sacrifice.  Many of the people at Snehakiran Care Center and Sivananda Rehabilitation Home fall into this category.

If you can put together a pretty good CV, chances are you may be invited to give a lecture in a formal institutional setting.  This will give you instant cred among the brahmans, both Bostonian and Hyderabadi.

And lastly, you can perform a PDF, otherwise known as “public display of the fist-bump,” as seen here by some random dudes in in Lumbini Park.  Wait… is that the DMARDs in HIV guy?