Whenever visiting another country I always endeavor to learn something of its history.  For India this is a tall order – the country has a lot of it.  I got a head-start of about 100 pages in John Keay’s “India: A History” while on vacation in Maine just prior to the trip.  Safe to say, it has been my Bible (my Rig Veda? my Bhagavad Gita?) while traveling.  As I’m sure my colleagues can attest, I’ve had my nose buried in it while riding around the city.  Troubled by the slow pace, I took a break to finish the 20 some pages on Indian history in my Lonely Planet guide.  From those two I’ll give a run down of some of the most interesting episodes or revelations of the early history below… I can hear Bassima cackling because, as she well knows, I’ve only gotten up to ~350 A.D.

Indian histories often begin with what I first learned in college as the “Indus River Valley Civilization” (~3,000 BC).  Now it is often termed the “Harappan Civilization” after one of its cities (Harappa) – the most famous city being Mohenjo-Daro “the mound of the dead men.”  Starting here for India is both strange and very fitting.  It’s strange because most of this civilization and most of the Indus River is in today’s Pakistan.  But it is fitting because the words “India” and “Hindu” ultimately come from Sanskrit and Persian words for river (i.e., the Indus River).  Indeed, at independence in 1947 what are now India and Pakistan had to come up with names for their new nations.  “India” was initially unfavorable to both as it stirred up notions of occupation by foreign powers and exploitation.  However, Nehru and others ultimately chose the name, much to the irritation of Pakistan’s founder Jinnah, who believed that “India” applied more to territorial Pakistan (for the reasons above) and that Nehru et al. were claiming subcontinental primacy.  Yet he favored “Pakistan”; can’t have your dhal and eat it too, Jinnster. 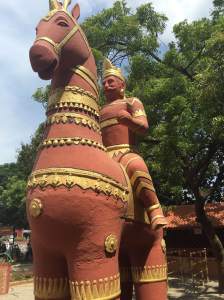 If the Indus River Valley Civilization is like ancient Greece’s (and in general Western civilization’s) Troy, as found and excavated by Heinrich Schliemann, the Mahabharata and Ramayana are India’s equivalent of the Iliad and the Odyssey of Homer.  However, while Homer’s epics allude to and give insight into Mycenean Greece and its archaeological finds, India’s epics have nothing to do with the Harappans.  The latter were settled agriculturalists while the Aryan warriors of the epics began as a semi-nomadic horse culture with no words for things such as a “plough.”  The Harappans have no immediate successor culture – something which is unique in the history of ancient civilizations.

The Buddha statue on the island in the Hussain Sagar

The next phase of history brings us up to the time of the Buddha Siddhartha Gautama ca. 400BC, a prince of the state of Sakya in what is today Nepal.  His ideas flourished in large part because of powerful patronage from the likes of Bimbisara, ruler of Maghada from its capital of Pataliputra (today’s Patna – capital of modern Bihar).  That state would ultimately transform into the Mauryan Empire of Chandragupta Maurya – a man known to the Greeks as “Sandrocottus.”  His descendant, the great emperor Ashoka, would also prove to be a friend to Buddhism, founding monasteries as far south as Andhra Pradesh (i.e., the very region of Hyderabad).  However, today Buddhism is the religious affiliation for less than 1% of the population of India.  For whatever reason, its practice faded in the face of traditional Hinduism and a powerful new incomer called Islam. 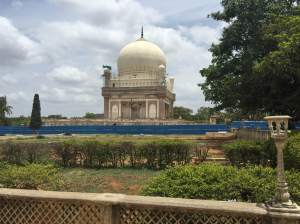 The ancient intersection of Western Civilization and Indian Civilization (at least in a face-to-face sort of manner) is extremely brief and results from the furthest conquests of the Macedonian Alexander III, “the Great.” After over-running the ancient Persian Empire he said to his troops in a Miley Cyrus-like [get it?] manner: “we can’t stop” and headed for central Asia.  They finally mutinied at the Beas River in the Punjab – barely within today’s Indian border.  Somewhere thereabouts Alexander met Sandrocottus.  He also picked up a Brahman priest named Calanus whom he took with him back to Babylon.  At one point Calanus decided he was too old and it was time to die.  Calmly he had a pyre constructed, laid himself down amongst the flames, and burned himself to death – all the while completely composed and without saying a word.  The Greeks and Macedonians were most impressed.

After Alexander’s death, a Hellenistic kingdom remained for some time in Bactria (today Southwest Afghanistan).  Greek influence was very much apparent in the Afghan/northern Indian kingdom of Gandhara, where carvings of the Buddha showed Hellenistic elements.  To the Indians, these Greeks were called “Yavanas,” or “Yonas,” terms which originated from the Persian word for “Ionian.”  The Ionians were a type of Greeks living on the coast of western Turkey who famously revolted from their Persian overlords (leading to the famous invasions of Greece in 490 and 480 BC).  But “Yavanas” would come to be an Indian word for all foreigners.  Therefore, the Greeks left an etymological mark on subsequent Indian history.  And as a foreigner myself, I think I’ll temporarily give in to the mutiny of my limbs, stop there, and head back to the comforts of Babylon (bed).