There are many benefits to participating in global health rotations. You get to go places you have never been: 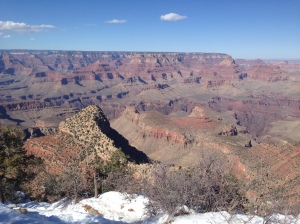 And see things you have never seen.  Namely, in this case, myxedema coma.

Since starting my training in medicine there has often seemed be themes at work: to my week, my admissions, my problem lists etc. I think my least favorite of all time was the week of constipation during my geriatrics ward rotation. This week however at Northern Navajo Medical Center, with great improvement, it was hypothyroidism.

Early in the week, I made my way to the emergency department to evaluate a patient who was presenting with new onset staring spells. Her son was concerned when for the first time it happened twice in one day, and had immediately brought her into the hospital. This elderly patient had not sought medical care in over 15 years and therefore, according to her son, was perfectly healthy with no medical conditions. My seemingly absurd H&P begged to differ with the sentence, …. Patient presented with staring spells, found to have new onset seizures, severe sepsis, anemia with hemoglobin of 5, left lower extremity DVT and hypothyroidism. You know the feeling you get when your assessment and plan gets to its fifth active issue, and you just know that clearly you are missing a very important piece of information allowing you to tie it all together? In this case it was adenocarcinoma of the colon.

Her TSH on admission was abnormal at 78. This prompted a wonderfully informative conversation with one of the internal medicine attendings about the time she took care of a patient with myxedema coma.  It was the only patient she had ever cared for with that diagnosis, and she spoke lively of the treatment she had provided and the quick turn around of the patient.

Later in the week I experienced home call for the very first time. By that I mean I was in my dorm, around the corner from the hospital, intermittently holding my phone out the door trying to return pages for approximately 45 minutes before my night got busy. My third admission was an elderly gentleman brought in by his granddaughter for what I could best understand as lethargy for the past few days. He was bradycardic, severely hypothermic and I could press about half of a finger into his skin just about anywhere on body before hitting resistance. He told me in a slow, confused voice that he felt fine, and answered no to every review of systems inquiry.  His labs showed a normal white count, no evidence of infection on his chest x-ray or in his urine. Even prior to his coming into the hospital, his heart was doing about half of the work as a normal heart, and his kidneys about a fifth. This definitely could have explained the diffuse edema, but not everything about his presentation. The remainder of his available labs also did not provide much insight.

Could this constellation of symptoms be indicating myxedema coma?

I could not help but wonder if this was on the top of my differential because it was fresh in my mind, it was three in the morning and I was spending all my remaining energy trying to navigate a new hospital system, or because it was actually the most likely diagnosis. Unfortunately, watching the pot for a TSH to boil is never helpful, and after an hour or so I learned that this particular lab test is only run during the day.  In the morning I presented my patient anxiously on ICU rounds, waiting for feedback on my assessment, but did not receive anything definitive. About a half hour later his TSH returned >100.

On review of Uptodate, it turns out the definition for myxedema coma is quite vague, which I believe allows me to be all the more resolute in my diagnosis.  The endocrinologist reached via the PALS line, a telephone consult service provided by the University of New Mexico, also did not disagree. Lastly, and maybe most telling, after just one day of levothyroxine the patient was much more alert and energetic by all accounts, especially his.