Today is technically day 5 of our trip to India, but the first time I’ve sat down to reflect on the experience so far. Between the 30+ hours of travel, jetlag, and all the new sights, sounds, smells and people, it’s been a lot to take in. And honestly, it’s going to take a few more days before anything meaningful has managed to process its way through my brain. There have been several moments already in this trip that I know I will carry forward throughout my career and in life, moments both inspiring and sobering, but they’re still too fresh and without much context to get too existential over. So instead, I’ll give you a taste of what my mind is like right now via a series of snapshots over the next few posts. 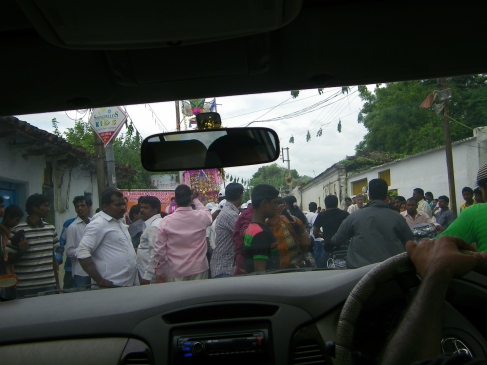 Traffic. The first thing that struck me about India, or perhaps Hyderabad in particular, is the traffic. We drove back from the airport at 9pm primarily on an elevated highway, and I doubt we ever went above 30 miles per hour. That’s not true. Actually, you oscillate between 70mph for 100 yards to a screeching hault 2 inches from the car/autotaxi/motorbike with a family of 5 in front of you. This is everyday/everynight driving in Hyderabad. The city grew exponentially as it became the center for many international technological corporations, ie IBM, Amazon, Facebook, to the point where part of the city is called HiTech City (Hyderabad Information Technology Engineering Consultancy City). As a result, the existing roadways are now jam-packed 24/7. Traffic is nonstop, honking is constant and more of a “hey there, I exist and am coming up alongside you at an alarming rate” rather than an aggressive gesture, and as James put it, no matter where you are going, around the corner or across the city, it will take an hour. And so trips in the car are spent purposefully looking away from the windows in the daytime and recovering from jetlag (open-mouth napping) at night.